In coordination with the RGV Bethel Garden Mural Taskforce and Village in the Valley, the South Texas College Library Art Gallery and Art Department take pride in preserving McAllen’s culture. To honor this pride, four murals will be painted representing the themes of Hope, Faith, Love, and Unity at the Historic Bethel Garden.

On October 6th & 7th from 12:00 p.m. to 4:00 p.m., at 1322 S. 16th Street in McAllen, TX, South Texas College art students will assist in painting the murals while gaining experience in mural painting and connecting with leaders in the community.

The mural painting days are open to the public, and supplies will be provided. Those looking to contribute will need to wear work clothes and shoes that can be painted on.

According to Ray Howard, a community organizer, the history of “McAllen’s Bethel Garden is a tribute to its African American heritage and cultural influence. It is a continuous celebration of our inclusion and contributions to the city’s growth and development over time. Under former Mayor Darling’s leadership and now Mayor Javier Villalobos, coupled with interagency collaborations and a host of volunteers, the treasured memories of our McAllen ancestors and their vision for an even better future for all is preserved for generations to come”.

In the 1930s, one of McAllen’s early African American families relocated to the McAllen community from Victoria, Texas. Mr. Eugene Hubbard, a World War I veteran, worked for The San Antonio & Aransas Pass Railroad, a subsidiary of the Southern Pacific Railway. In 1941, the City of McAllen added the Booker T. Washington Addition, where those of African descent could buy property. In 1943 Hubbard and Williams purchased a property at the corner of S 16th Street and later Booker T. Avenue, where the center of the neighborhood began with Little Bethel Missionary Baptist Church and later Booker T. Washington School.

The original building was condemned in the early 2000s after the congregation moved. In 2012, the City of McAllen requested help from the Hidalgo County Historical Commission to achieve state-recognized historical status for the former Bethel Church site. Today, the Bethel Garden is living and serves as a prominent reminder of how faithful resilience and hope can overcome the divisive forces of segregation and discrimination. Many community volunteers, area businesses, educational institutions, and the City of McAllen have helped preserve this site. 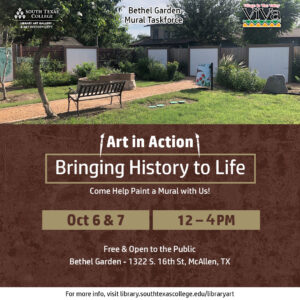